Moab in the Movies

Surrounding yourself with big screen scenery only requires a ticket to Moab, Utah. After all, it was the Duke (John Wayne) himself that said you have to go, "where God put the West". The Moab area has long been renowned for its beautiful, otherworldly scenery, a quality which attracts hundreds of thousands of visitors from around the world, year after year. Not surprisingly, it’s this same stark, rugged scenery that has been attracting filmmakers here ever since the 1940s. Roughly 80 percent of the TV and movies filmed in Moab area have been shot in the Professor Valley - also known as Castle Valley where the Colorado River meanders observantly through the scene. You can see it for yourself on our Full or Half Day Colorado River Adventure.

Many movies filmed in Moab have been largely forgotten, such as the 1983 film Spacehunter: Adventures in the Forbidden Zone and the 1988 Western-horror-redneck comedy Sundown: the Vampire in Retreat. Some Moab movies and media backgrounds however, have become classics. Remember, we're not only talking about movies, but commercials, print advertisements (ie. Marlboro man) and music videos like Bon Jovi's "Blaze of Glory" video, complete with flames atop the red rock cliffs.

We've put together a YouTube playlist video montage (below) but first wanted to open with the Bon Jovi music video, which pays tribute to the old drive-in movie, whose burning screen plays the feature film Young Guns! It's an appropriate opener!

Here are some of our favorites shot in Moab:

The very first episode of MacGyver opens with our ever-so-resourceful hero climbing an enormous cliff “somewhere in Central Asia.” Central Asia, coincidentally, bears a striking resemblance to Dead Horse Point. After infiltrating a camp of vaguely Asian-looking soldiers, he rescues a downed American fighter pilot, defuses a bomb with a paper clip, and blasts himself off a cliff with a flare gun before parachuting him and the recovered pilot to safety, all in the first five minutes of the show. We wouldn’t expect anything less.

Indiana Jones and the Last Crusade – 1989

In the opening scene of this film, a young Indiana Jones, played by River Pheonix, makes a daring attempt to recover a valuable archeological artifact. After running out the cave where the artifact was supposedly recovered, the area around Double Arch in Arches National Park is clearly visible. Other parts of the film, supposedly in the Middle East, were filmed around the Moab area as well.

Several scenes in this Ridley Scott cult classic were filmed at various locations around the Moab area, including Arches and Canyonlands national parks, Cisco, and the La Sals. Of course, the most famous scene of the movie is their

Curly's gold is the driver in this sequel. It's a great excuse for the city trio - led by the marvelous Billy Crystal - to venture again into places and adventures in "The West" that are ill-advised - at least without a guide! Moab scenery and wild west mystique plays a solid role in this movie. Turns out

When it comes to entirely implausible action movies, Con Air is right up there with the best of them. With a star-studded cast including a scruffy Nicholas Cage, John Malkovich, Ving Rhames, John Cusack and a creepier-than-usual Steve Buscemi, this film offers all of the explosions, questionable physics, and guns with unlimited magazines of ammunition that you could possible want from an action movie. Of course, the desert landscape around Moab also features prominently throughout the entire film.

For the more self-deprecating trekkie, the film Galaxy Quest was a hilarious exaggeration of some of the more implausible moments of the Star Trek series. Again taking advantage of the otherworldly landscape, filmmakers chose Goblin Valley to represent the alien planet on which the bumbling protagonists encounter a rock monster, an ill-fated pig lizard, and some cute, but vicious aliens.

Although only featuring in this film for the opening five-minute sequence of Tom Cruise rock climbing, this scene, filmed at Dead Horse Point, is one of the most memorable of the film. And in case you’re wondering: yes, that IS actually Tom Cruise up there doing almost all of those stunts, which is impressive even considering the fact that we was strapped into a harness which was digitally removed later.

In self-parody layered on self-parody, Tom Cruise again stars in the opening scenes of the third Austin Powers movie, in which he plays the bespectacled, super-hip secret agent. Dead Horse Point features prominently again in this scene, which has our groovy protagonist parachuting into a speeding car, playing chicken with an assault helicopter, and destroying said helicopter with dual machine guns while flying through the air.

The J.J. Abrams reboot of the Star Trek franchise proved to the world (and to the box office) that the series still has plenty of life in it. It also established once and for all that you don’t have to be a nerd to appreciate the exploits of the starship Enterprise and its heroic crew. To recreate the cracked and barren landscape of the planet Vulcan, Abrams chose the San Rafael Swell along with the Vasquez Rocks Park in California.

Ask Moab locals what they think of the film 127 Hours and you’ll typically get a roll of the eyes and a lecture on hiking safely while you’re in the desert. The film however, opened to critical acclaim and Aron Ralston himself, played by James Franco in the film, described it as “So factually accurate it is as close to a documentary as you can get and still be a drama.” The film was shot in the same location where Ralston was trapped for his eponymous 127 hour ordeal, in a hard-to-reach area of the Blue John Canyon.

Inspired by the 1917 Edgar Rice Burroughs novel A Princess of Mars and subsequent comic book adaptations, this $250 million blockbuster failed both critical and box office expectations. That is, of course, no fault of the scenery, which made for quite a convincing portrayal of the Red Planet. Visitors have often remarked on the similarity between the Moab desert and photographs of the Martian landscape, so it’s only natural that Disney would choose to film much of the movie here.

Some characters simply belong to the land that surrounds them, like ancient stones or trees in the landscape, they help define the mystique of the place. The Lone Ranger is one of these -literally plucked from the earth and formed into character by the native of all natives - Tonto (played by Johnny Depp). The movie has suffered in the reviews, but made for some fun moments for the silver screen in 2013. 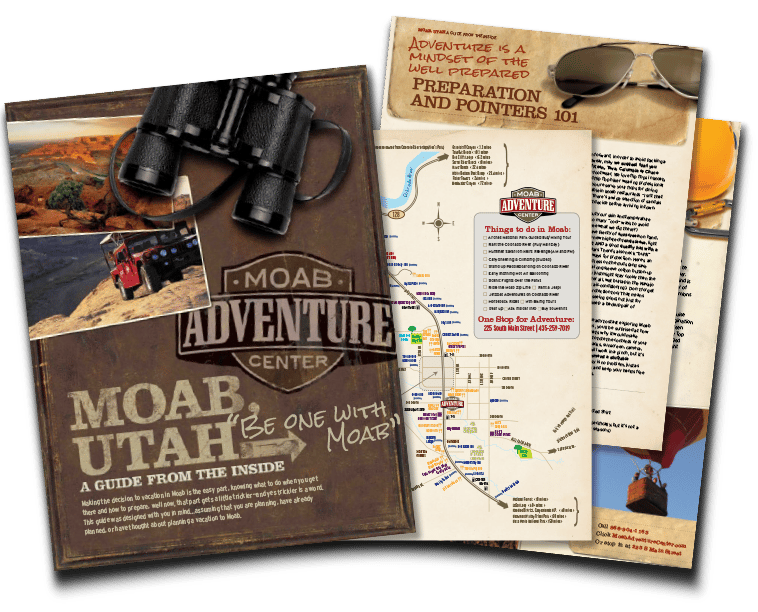